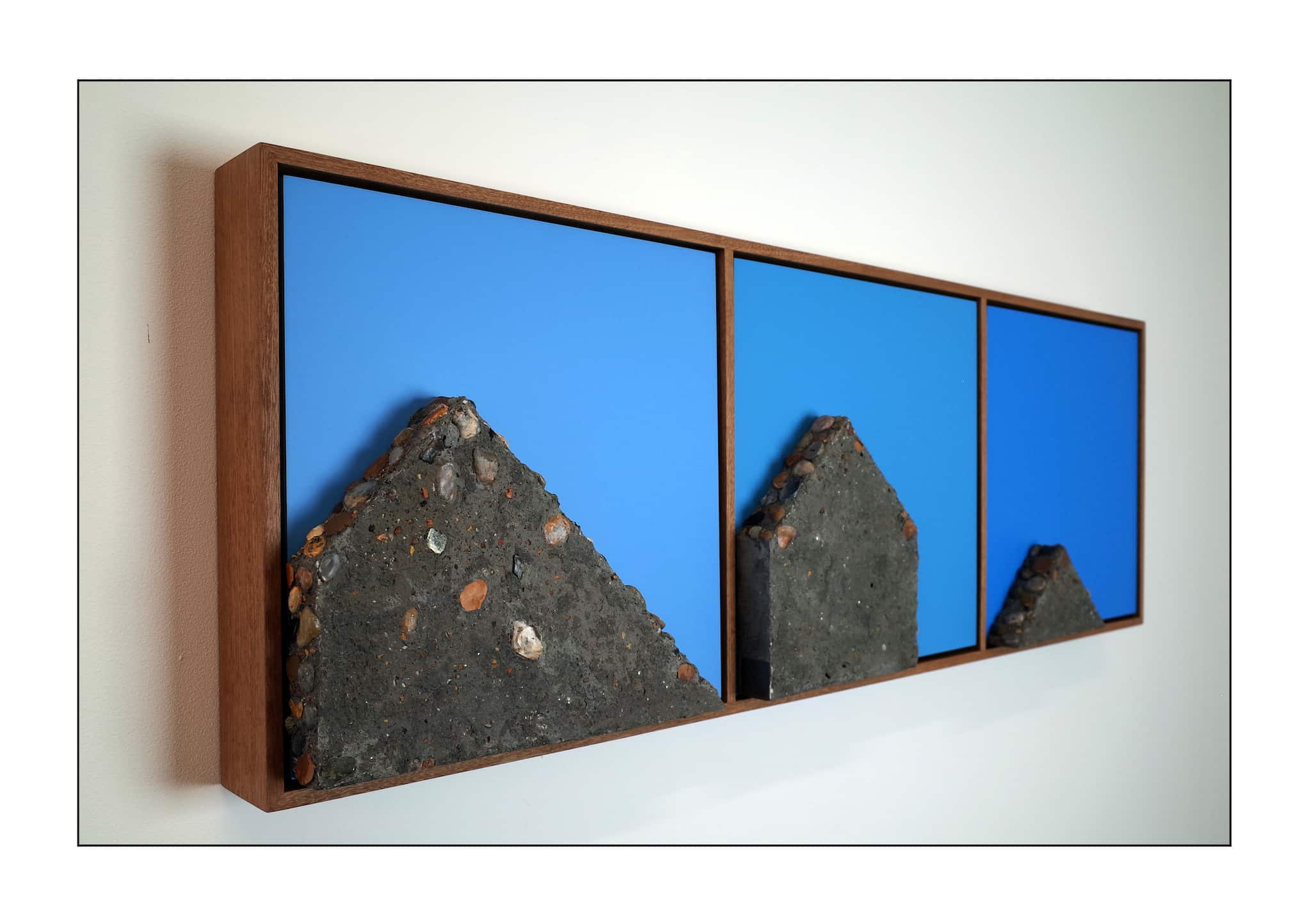 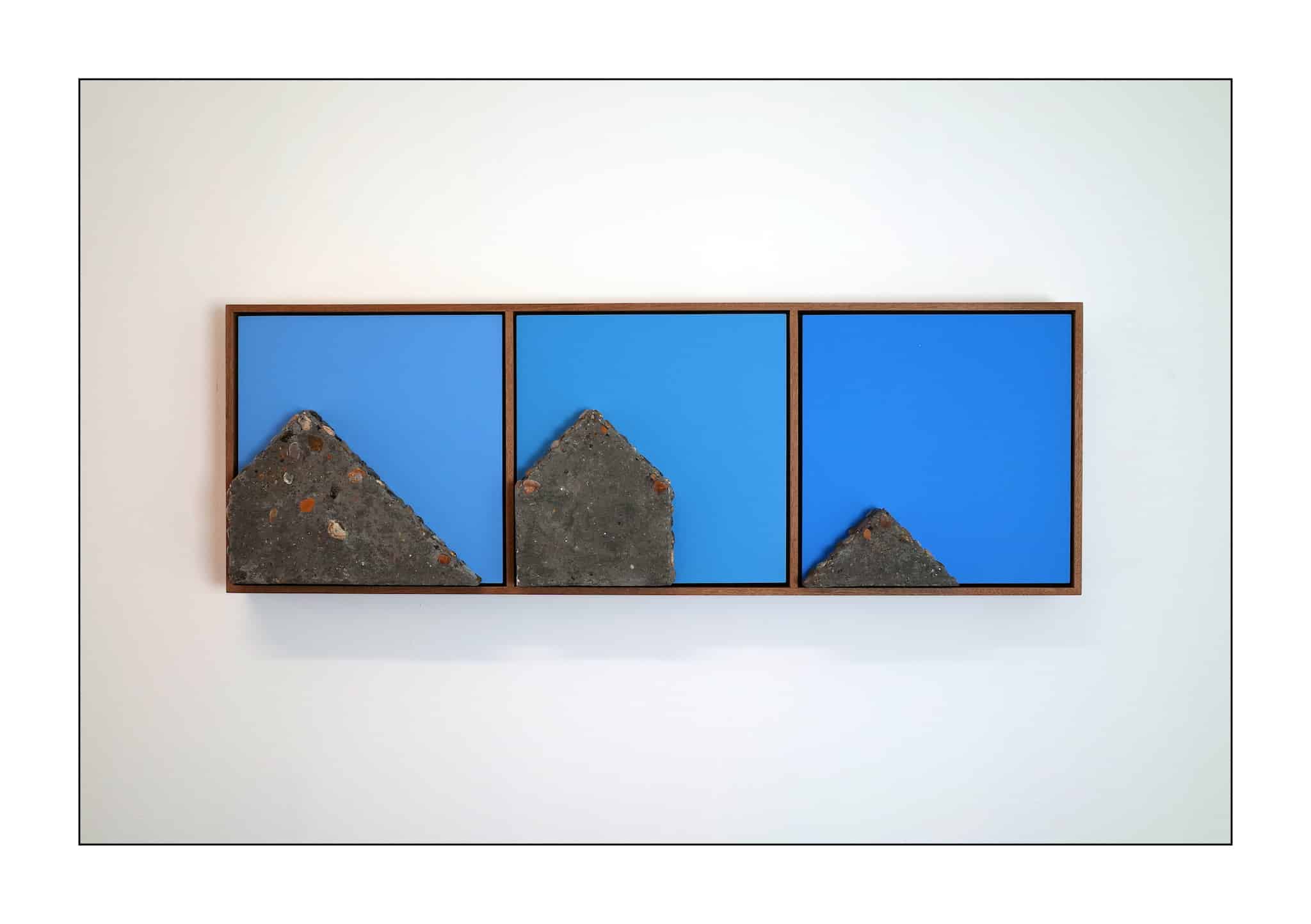 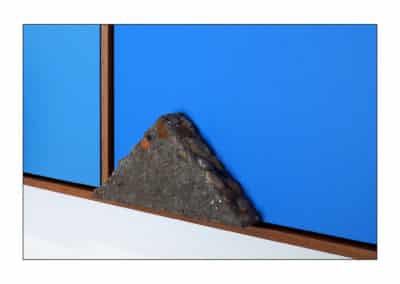 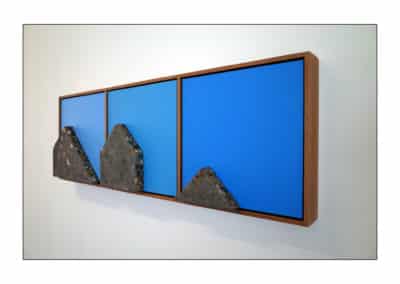 “There are many different art traditions. For example: recasting the meaning in a found object or appropriated image by placing it in different context; minimalism’s concentration on materials and shape for their own qualities independent of representation; the hyper-realistic depiction of the world ‘as it is’; and art as political or social protest. Those probably sound like contradictory approaches, and, of course, they often are. Yet it is perfectly sensible to claim that Charlie Warde’s work in ‘Concrete Artifacts’ utilises all four.

Let’s take Erasures 1, 2 and 3. Arranged on each panel, the blue of a particularly intense sky, are sections of concrete from the Trellick Tower walkways, as designed by Ernő Goldfinger, completed in Kensal Town, London in 1972.   Presenting that in a gallery context might make us think about the end of such a building, the point at which it is broken down into its constituent elements and passes beyond use. The memento mori of a building. It also suggests that we should look at component elements as aesthetic objects in their own right, not simply as functional parts of a much larger architectural whole. The aesthetic is closely allied to minimalism: Carl Andre’s way of pointing to the qualities of bricks, for example, and their possible arrangements in simple, grounded combinations. Likewise, Warde’s fragments float free of the utilitarian reasons for their production just as they celebrate its material presence, and propose that art and industry aren’t in the simple opposition one might assume.

Those first two traditions (of found object and minimalist language) aren’t really present, however. They are ghosts, and play their role with ghoulish effectiveness – for actually, in the clarity of the morning light, a closer look reveals that these are paintings. Everything Warde makes, he makes from paint – paint, indeed, which he makes himself. No stone, no sand, no concrete was harmed in the production of these facsimiles. So the hyper-realist tradition is fully present and correct. Warde wants to push painting as far as it will go: first he sets up the archetypal response to contemporary art – why, anyone could grab a chunk of wall! – only to pull away the rug of scorn – wow, the work in that, and the skill!

That counterpointing of the contemporary and the traditional is very much to the point of the fourth mode of art: housing is a political subject. Indeed, it has rarely been as political as it is in Britain now, where three factors are at the root of severe problems. First, there aren’t enough homes: successive governments have set targets to increase the rate of building, but have failed. Second, many homes are not up to standard, the poor having been corralled into under-maintained stock. It took the Grenfell Tragedy to bring that to attention. Third, what homes there are – especially in London – cannot be afforded by those who need them. That’s a function of short supply, the distorting effect of foreign capital flowing into the market, and the drying up of public investment in social housing – all given added bite by the disastrous changes being introduced to the welfare system through universal credit which, if it is rolled out fully, will trigger a spike in UK homelessness well beyond the doubling of the last few years. The Erasures speak to all of those issues. They act as memorials for high rises which – rather than being modernised and made safe – are demolished to make way for new developments which cannot be afforded by people like those who lived in the blocks. In Warde’s words: ‘Brutalism is part of the Zeitgeist again because it harks from a time when the state provided. It represents a muscular return to strong core values.’ The new, as in Warde’s layering of conceptual and realist approaches, may well need to incorporate former ways.”